Public consultation is a formal process through which citizens and stakeholders give their feedback and views on policies, plans, proposals, laws and other options presented by the government. It can take place at various stages of policy development, from exploring ideas set out in proposals or policy papers through to reviewing drafts of legislation or reports.1 Although public consultation typically involves citizens and stakeholders responding to something presented to them by the government, in the case of the SDGs, it should also involve regular dialogue between decision-makers, citizens and other stakeholders on progress, challenges, gaps and next steps in implementing, monitoring and reviewing the SDGs. There are a range of techniques and methods to consult citizens and stakeholders, including face-to-face workshops, online platforms, written comments, focus groups, citizens’ juries, public meetings, user panels and crowdsourcing comments on proposed policies or legislation.2 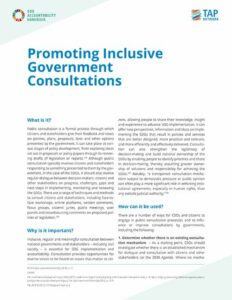 Inclusive, regular and meaningful consultation between national governments and stakeholders – including civil society – is essential for SDG implementation and accountability. Consultation provides opportunities for diverse voices to be heard on issues that matter to citizens, allowing people to share their knowledge, insight and experience to advance SDG implementation. It can offer new perspectives, information and ideas on implementing the SDGs that result in policies and services that are better designed, more practical and relevant, and more efficiently and effectively delivered. Consultation can also strengthen the legitimacy of decision-making and build national ownership of the SDGs by enabling people to identify priorities and share in decision-making, thereby assuming greater ownership of solutions and responsibility for achieving the SDGs.3 Notably, “a transparent consultation mechanism subject to democratic pressure or public opinion can often play a more significant role in enforcing institutional agreements, especially in human rights, than any outside judicial authority.”4

While consultations may vary depending upon the national or cultural context, there are a number of essential conditions for a good consultation. It is important that consultations are well designed, properly resourced, and based on a genuine desire to involve citizens and stakeholders and take their views into account.5 The input of citizens and stakeholders must be able to influence the government’s proposal, plan, policy or report on the SDGs and not be a tokenistic exercise of civic engagement. Consultations should seek to reach a range of different relevant stakeholders – including vulnerable and marginalized groups – and be conducted in an open, transparent, inclusive and participatory manner. Steps should be taken to ensure that existing power relations – based on gender, age, ethnicity, social status or other characteristic or dynamic – do not unduly influence the process to conduct a meaningful consultation on the implementation or review of the 2030 Agenda. Further, the outcome of consultations should be shared widely with clear plans as to how the results will influence or contribute to SDG implementation or review. Ensuring meaningful consultations with citizens and stakeholders may require a change in culture in how governments interact and cooperate with the public, as well as dedicated mechanisms that take into account the voices of people across a range of public institutions and organizations.6

There are a number of ways for CSOs and citizens to engage in public consultation processes and to influence or improve consultations by governments, including the following:

b. Encourage the government to develop a stakeholder engagement plan that identifies key stakeholders and methods of engagement such as public consultations.8 This plan should outline the strategy for national consultations in relation to the SDGs including stakeholder participation in policy development and national review processes.

c. Promote the use of multi-stakeholder bodies or forums to engage in public consultation processes on the SDGs, especially civil society bodies that represent vulnerable or marginalized groups. Such bodies and forums can become mechanisms for ongoing national dialogue on the implementation and review of the SDGs.9

d. Encourage the government to convene a consultative forum for dialogue on SDG implementation and review, if formal bodies or forums do not already exist.10 Such forums may address the SDGs generally and/or focus on specific SDG targets or issues that require a deeper and more focused discussion with citizens and other stakeholders.

2. Urge the government to hold public consultations regularly – CSOs should urge the government to hold consultations on the SDGs at regular intervals. especially in relation to national and subnational review processes. Although the 2030 Agenda does not specify a frequency for national or subnational reviews of the SDGs, “more frequent reviews… will support stronger national engagement”11 and promote greater accountability to citizens.

“We also encourage member states to conduct regular and inclusive reviews of progress at the national and sub-national levels… [that] draw on contributions from indigenous peoples, civil society, the private sector and other stakeholders…” – 2030 Agenda, paragraph 79.

4. Ensure consultations are inclusive and engage vulnerable and marginalized groups – CSOs should urge governments to make consultations inclusive and accessible to a wide variety of stakeholders, especially groups that are traditionally marginalized or excluded. Consultations should use a range of inclusive and accessible approaches – including both online and offline methods – and be conducted in local languages or language that is accessible to participants.12 CSOs can play an important role in advocating for groups – including other CSOs – that may be excluded from public consultations or are unable to participate without additional support including financial support. For example, children and young people are a special group who require access to child-friendly, age-appropriate and safe mechanisms and spaces to engage in public consultations with decision-makers.

6. Publicize the outcome of consultations – CSOs should urge governments to publish the outcome of consultations and report back to participants on how their inputs have been taken into consideration. Such reports should outline who attended the consultation, how it was conducted and documented, and what, if any, decisions were taken as a result of the consultation. CSOs can also publish their own account of participating in consultations on the SDGs – including through newsletters, blogs and social media – including whether processes were conducted in a meaningful, accessible, inclusive and participatory manner.

"We would say that it is critical to push for and constructively use any civil society space in government processes." – Gomer Padong, Philippine Social Enterprise Network15

Where governments are unwilling or unable to hold consultations on SDG review or implementation, CSOs may hold their own independent consultations and publicize the results among government, citizens and other stakeholders. In such circumstances, CSOs should strive to meet all of the conditions for good public consultations.

• Experiences from national voices: Civil society engagement on national reviews of the 2030 Agenda (2016), by Together 2030.

• The International Association for Public Participation (IAP2) is an international association of members who seek to promote and improve the practice of public engagement.

Use of digital tools for consultation

With rapid advances in the use of information and communication technology, online public consultations are increasingly becoming a popular method of engaging with citizens. Digital tools – such as social media and other web-based platforms – provide decision-makers with the means to communicate directly with citizens in real time. Similarly, CSOs may use digital tools to engage with and ask questions of decision-makers, provide feedback on government services and comment on the policies and decisions of governments.16 Digital tools that facilitate dialogue and consultation between governments and citizens can thus be used as a two-way street to promote accountability for the SDGs. Digital tools should ideally be used in combination with other methods for public consultation so as not to exclude segments of the population that do not have access to or are unable to use the internet.

Case Study: Principles of Ownership and Participation for the 2030 Agenda

Africa: Implementation and monitoring of the 2030 Agenda in Africa has largely benefited from a legacy of formulating development plans that have demanded broad consultations with different stakeholders. In 30 countries, consultations took place under the aegis of governments, UN country teams and key actors in civil society, including women and youth groups, persons with disabilities, people living with HIV/AIDS, academia and the private sector. Close to 350,000 stakeholders were consulted at the subnational and national levels. Methods applied included face-to-face meetings, focus group discussions, stakeholder interviews, radio phone-in programmes, television panel interviews, and expert group meetings. Several countries used online and off-line surveys, including MY World surveys, and text messaging, which resulted in feedback from 17,000 young people in Uganda.17

Jordan: Ahead of its 2017 VNR, Jordan’s Ministry of Planning and International Cooperation, the departmental focal point for 2030 Agenda implementation, prepared a stakeholder engagement strategy to ensure the widest participation from all non-state actors in implementation and the VNR. The strategy proposed a variety of consultation mechanisms including taskforce meetings, workshops, focus groups and debates. It also included several outreach tools like printed materials and social media engagement to ensure broad engagement on the 2030 Agenda. The strategy took into consideration the challenges to meaningful participation faced by non-state actors, namely: difficulties reaching the most marginalized, the tendency to involve larger non-governmental organizations (NGOs) rather than smaller, community-based organizations and individuals, and time constraints.18